Not only is the Snake River Valley an ideal place to grow Malbec, we find the complexity in aromas and flavor profiles to be most interesting. At Huston, we believe that wine is meant to be paired with food and Malbec is a very food-friendly wine. The complexity in its flavors of dried blueberry, black cherry and even tobacco and leather pairs well with red meats, but can also stand up to spicier pairings like Mexican, Thai and Indian foods.

Malbec’s historical path travels to both France and Argentina

Many people associate the Malbec grape with Argentina, however, it actually originated in France. According to Wikipedia, French viticulturist Pierre Galet notes that most evidence suggests that Côt was the variety’s original name and that it probably originated in northern Burgundy. The French plantations of Malbec are now found primarily in Cahors in South West France.

It is true that Malbec is the most widely planted grape varietal in Argentina. There are about 100,000 acres of Malbec planted in the world and 75% of it is in Argentina. Its popularity has surged in recent years, and is even considered to be the “national variety.” The Malbec produced in Argentina is a softer, less tannic version of the Malbec in Cahors. It is also more fruit forward and velvety, where the French versions are more leathery, with tart currant flavors and a slight bitterness.

Malbec was first introduced in Argentina in the mid-19th century. Mayor Domingo Faustino Sarmiento had cuttings brought from France by agronomist Miguel Pouget and planted in Argentina. The grape clusters of Argentine Malbec today are different than their French relatives. They are smaller berries in smaller, tighter clusters. This suggests that the clone that was brought over by Pouget in the 19th century, and later by other immigrants, may have gone extinct in France due to frost and the Phylloxera epidemic or Great French Wine Blight.

The grape is an inky, dark purple color with robust tannins. Malbec needs more sun and heat to mature than either Cabernet Sauvignon or Merlot.

Malbec has found a home in the Snake River Valley AVA

Though Idaho has less than 30 acres of Malbec grapes planted, the acreage is growing each year and gaining momentum in the Northwest wine region. The Snake River Valley’s rich volcanic soil and long, hot summer growing season is a perfect combination for Malbec grapes. Idaho’s hot days and cooler nights create the acidity levels needed for great Malbec.

Malbec from Huston Vineyards is making its mark

At Huston Vineyards, we have long touted Malbec as a star performer in our line-up. Our 2012 vintage won Best in Show at the 2014 Idaho Wine Competition. More recently, the 2015 vintage, which is now in stores and our tasting room ( Purchase Here ), won Best Red at the Great Northwest Wine Invitational held in October 2017.

Five years ago, we joined Buenos Aires, Argentina, New York, NY and Toronto, Canada in celebrating World Malbec Day (April 21, 2018). The World Malbec Day dinner at Huston Vineyards involves a menu of Argentinian style foods paired with several vintages of Huston Malbec. We love to share with our guests the unique nuances that make each vintage special, and how that is enhanced and enjoyed with particular food pairings. Our Huston Vineyards World Malbec Day has grown to be one of our most anticipated events at Huston each year, with tickets now selling out in record time.

See our Calendar for more information on World Malbec Day activities at Huston. 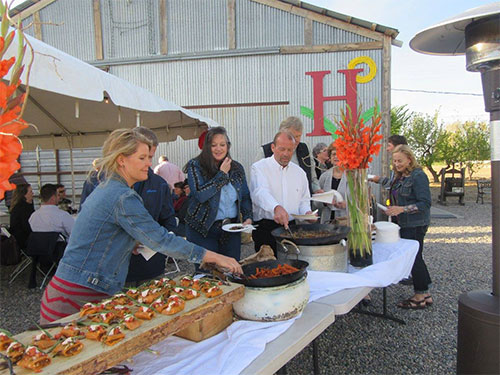